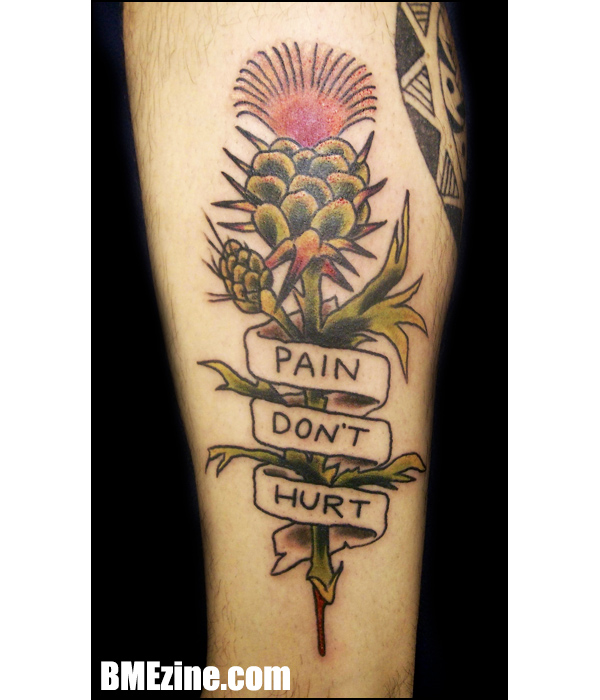 And finally, folks, we conclude our broadcast week (and our summer of celebrity death) with this Roadhouse-inspired Patrick Swayze memorial tattoo by Emily at American Ink Tattoos in Chattanooga, Tennessee. She explains:

Roadhouse is a very important movie to my circle of friends (anyone who hasn’t seen the pop-up video commentary on this flick is seriously missing out on some quality drunken laughs), and when Swayze died I drew up this tattoo. It was something I had to do that day, and thankfully my good friend Tom was up for it. The thistle is a metaphor for Dalton, as we all know of his philosophical/cooler genius…

Fare thee well, Swayze. What else went on this week?

- Brianna made her triumphant return to ModBlog.

- Josh will seriously just straight up murder you.

- The appropriately named Bluetat checked in from some mannequin graveyard. He seemed pretty happy about it.

- Your editor is not up on his Spanish slang, apparently.

Thanks for hanging around, friends. Also! There may still be some goodies left for BME Shop’s 50%-off Kaos sale! Go take a look before it ends on Sunday at midnight. Other than that, we should be around tomorrow with a fun new interview, which is the sort of thing we can all get behind, right? Then, come Monday, we fire this sucker back up like normal. Until then, have fun, stay safe, and, of course, thank you for your continued support of BME.

6 thoughts on “This Week in BME”