I’ve mentioned before that when it comes to bridges piercings, Eric Stango is my hero, but he’s topped himself today by this awesome orbital. We’ve seen nasallang orbitals before, but Eric’s upped the ante with a full-nose orbital that passes through a pair of nostrils and a septum (ie. nasallang) as well as through his massive bridge piercing. I’m quite certain that this is a first, so for now I dub this THE STANGO. There’s not much to see, but if you’re curious click here for an up-nose shot (he warns, “sorry about the copius amounts of nose hair… I’m Italian!”). 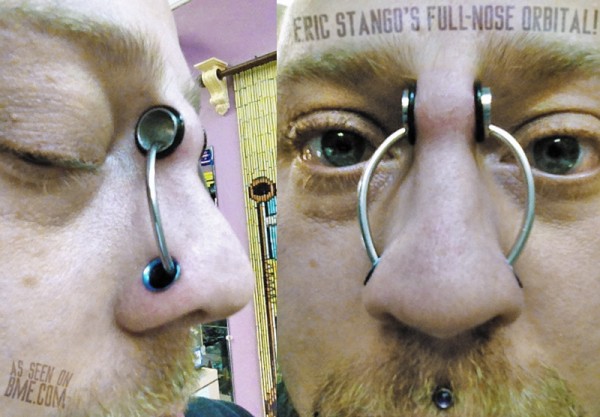 Ruslan, who has both large nostrils and a septum (which can function as a nasallang) just posted a unique looking picture of himself wearing a ring through them, making for a nasal orbital, a very unusual look. It instantly reminded me of another creative icon in this community — there’s a 2007 photo on ModBlog of Eaten Placenta wearing a similar configuration. 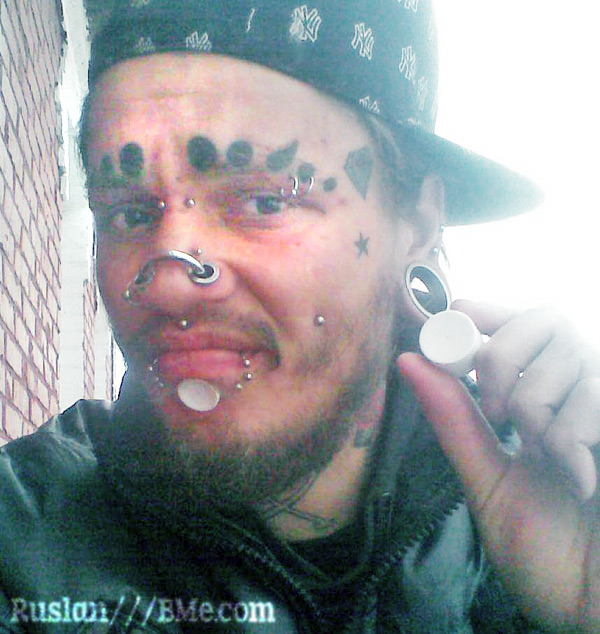 Here’s another one of those extremely, extremely rare ultra-unusual piercings that always make my day when I wake up to seeing them. I can’t imagine how much force it must have taken to push the needle or punch through the big hunk of cartilage that makes up that portion of the nose — it’s a very imposing. The high nasallang piercing was done by Gabriele of Max Art in Italy (who I’m sure you know best from the SkinTunnel procedure), to accompany the existing nasallang and bridge piercings. Unfortunately it is unlikely that any more piercings between the bridge and the high nasallang could be done due to the anatomy, although they could be faked with microdermals.

I’m assuming you can tell from the purple marking line on his face which piercing is new. Now, you might be thinking to yourself, why is Shannon calling it a Mantis piercing? Is he going soft in his old age? Because that’s clearly an Austin Bar, not a Mantis piercing! But where you’re wrong is that you’re not looking at one piercing (an Austin bar is a horizontal piercing across the tip of the nose, like a far-forward nasallang), but two. The mantis piercing is essentially a very strangely placed — but still essentially standard — nostril piercing, which also means that it has faster healing than the Austin bar in general. Instead of going out to the side of the nostril, it goes straight forward, and in a pair gives the illusion of being a horizontal bar. It’s not a piercing that would work well on its own, and while you don’t need as many piercings as this perforated fellow, it is a piercing that looks best in combination with other nose work.

This Mantis piercing was done on Nicola by 23 year-old body piercer Massimo Cortese of Wildink Tattoo Studio in Naples, Italy, and currently guest spotting in Ferrara. Done centrally, this piercing would be called a “rhino“, but off-centre Massimo is calling it the Mantis, which I think is a good name for it. Oh and I had fun joking to my daughter that if this person sneezes that everyone around them has to take cover because all that body jewelry goes shooting in every direction like shrapnel. But in all seriousness, I suspect that this piercing in part came about because this gentleman is simple so covered in piercings that they spent some time brainstorming for new places to pierce!

Halex‘s tusk passes through piercings — two nostrils and a septum — made by Alex Roca of Zona Piercing & K-Os Tattoo in Barcelona, Spain.

Eatenplacenta from Welland has a pair of DIY 8ga nostril piercings, and a 9/16″ stretched septum — it sure looks funny when she puts a 14ga ring through all three of them, nasallang-style! You may remember this from when it was a BME cover back in July but I wanted to feature it here as well because I really got a kick out of the photo. 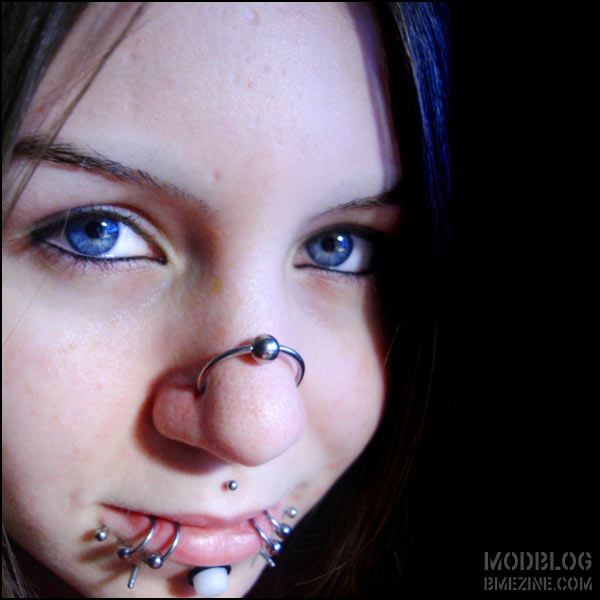 I really think that Pierced is probably the undisputed king of extreme nose work. Not only does he have a massive inch-plus septum piercing, but also 000ga nostrils (which he can wear a huge nasallang barbell through), and now he’s added an incredibly high 4ga nasallang as well. 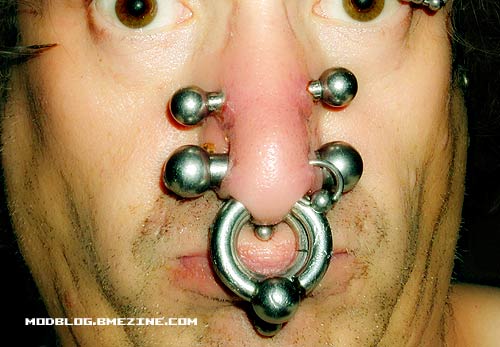 Check out his page for more.

Oh, and if you’re wondering, he’s a software engineer and his piercings are self-done.