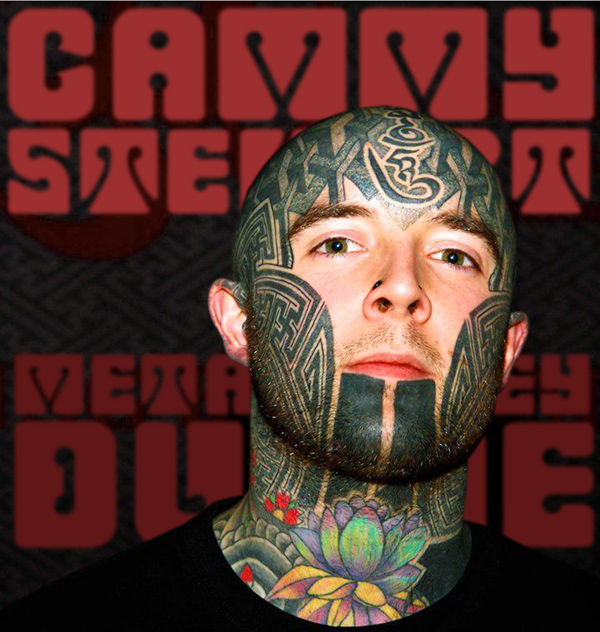 Cammy Stewart, whose work has been featured on ModBlog in the past, is a Dundee, Scotland based tattoo artist who started like most do — self-taught, tattooing anything they could on anyone they could find — but had an epiphany when he met neotribal, blackwork, and sacred geometry tattooing pioneer Xed LeHead at London’s Divine Canvas. He began merging this new style and philosophy of tattooing into his own, and became a part of what began with the idiosyncratic style of a small handful of outsider tattoo artists and has become a full-on art movement. Find Cammy at Metalurgey in Dundee, Scotland, online at facebook/cammystewart or instagram/cammytattoo, or email him at [email protected].

END_OF_DOCUMENT_TOKEN_TO_BE_REPLACED

This man is 12 feet tall, and was carved out of pure granite, by Jesus, under supervision of the Justice League of America, for some reason. About his tattoos, he says, they “started off as just a tribal sun in the middle of my back, and then it grew wings, then went down the left arm, and a few months later down the right arm. Next up will be the left and right thumb and wrapping around the wrists, about four inches up the arm.”

Sigh. If anyone needs me, I’ll be doing three- or nine-thousand sit-ups and eating raw eggs by the handful, shell included. Have a good night, ModBlog, and we’ll see you in the morning.

I’m really liking Trystan‘s new blackwork neck tattoo with gray flowers, done pretty quickly over about two and a half hours by Paul Wren at Th-inker Tattoo in Melbourne, Florida.

Niknak recently had her already extensive work by Dan DiMattia of Calypso Tattoo in Liege, Belgium. This latest session is about ten hours of work, and you can see lots more pictures on her IAM page.

This tattoo is nuts! If you look at just one small section of it, it’s just boring neotribal that’s been done a zillion times, but as a full body suit, it’s pretty wild looking! It looks like a fabric print I think… (I’ve seen closeup photos by the way, so it’s definitely real if you’re suspicious).

This piece (which reminds me of Dan DiMattia‘s style of course, as well as Vincent Hocquet‘s) was done by Pierrot at Arte Corpus in Marseille, France. Continue reading for an earlier photo.

END_OF_DOCUMENT_TOKEN_TO_BE_REPLACED

I’ve posted another interview with another Belgium neo-tribal/geometric artist (a la Dan), this time Vincent Hoquet of Beautiful Freak Tattoo (check out his BME gallery at that link) who’s been featured here a few times. Click through for the interview, and come back to comment.

In order to get you nice and relaxed for the extremely depraved tattoo I am about to post, a nice photo of some tribal blackwork done at 21st Century Body Art in York, UK.

Dustin says, “Circle-slash tribal club… I wear this badge proudly.”  Tattoo by Alie at The Shaman’s Den in Binghamton, NY, who I suspect has done an awful lot more of these tattoos, but without the circle-slash.