Yes.  You’re getting the bees.  And the flowers.  And even a dragonfly.

Tattoo by Sean Ambrose from Arrows and Embers in Concord, NH.

Oh, I remember now why I enjoyed writing here so much — it’s for the wonderfully whacky messages that I’d wake up to in the morning. Today’s message came to me from my friend Wayne Fredrickson at Fastlane Tattoo in Corona, California. At first I thought it was some sort of implant/tattoo combination, but no — after making sure that he was healthy enough to get tattooed, a 51 year old man with gout came to Wayne to get tattooed (his first tattoo by the way). He had a huge swollen elbow from the goat, and they converted it into the bulbous body of an oldschool spider. My nine year-old daughter absolutely loves this and isn’t grossed out by it in the least, so I’ve got to say that what this old guy did is just brilliant and charming — he’s transformed himself from a stereotypical “gross old man” to someone with a mirthful sense of hilarity about his body, and turned something disgusting into something comedic.

According to the Old Testament, Egypt was visited by 10 plagues, the 8th being a plague of locusts.  This just goes to show what a bad reputation locusts have had for thousands of years.  Well thanks to this young lady and tattoo artist Keegan Lam (IAM: *chineedred*), this locust shows that not all of them are horrible.

Keegan works out of Forever Yonge Ink in Toronto, and you can see more of this tattoo in the miscellaneous tattoo gallery.

When I first saw this photo, sent in by Eiji, my first reaction was WOW. I love how the yellow in the spiders pops against the muted gray of the skull. This tattoo really grabs your attention! Unfortunately I don’t know who the artist is that did it but I have to say, hats off to them. From what I gather, Eiji is a Japanese tattoo artist with incredible talent. The shading in the skull is beautiful as well. It almost looks like a graphite drawing. 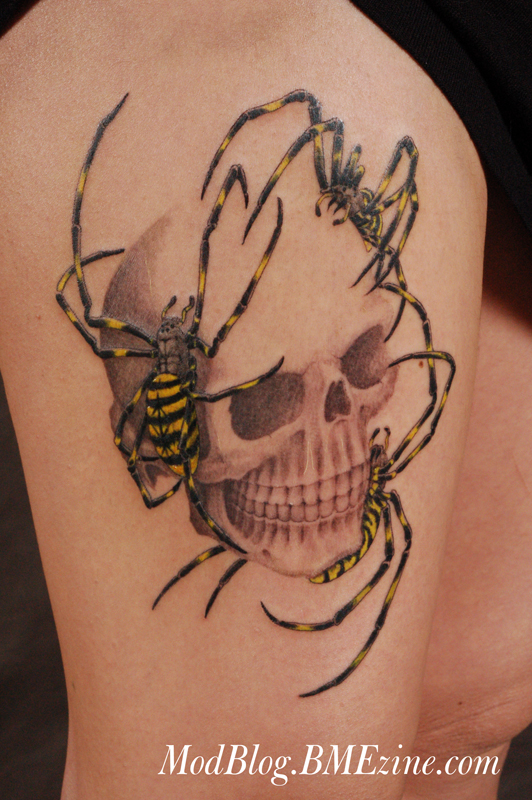 It’s time for yet another fantastic piece by Michael from Kipod Tattoo Studio in Tel Aviv.  The first image is just a small part of a much larger piece that combines so many different elements.

While I’ve never seen a 3-eyed horned owl before, I imagine it would probably look something like that.  Keep reading to see where the dragonflies come into play.

END_OF_DOCUMENT_TOKEN_TO_BE_REPLACED

As we all know, honey bees are some of the most vicious, cold-blooded, calculating killers in the insect kingdom. It’s true. They attack indiscriminately, all hopped up on The Devil’s Gold, engaging in wild, deadly kamikaze missions. Well, now, it seems, these audacious super-villains have expanded into the sex trade, which makes sense, we guess. While we would not wish this fate on anybody, if anybody does find him- or herself in a bee’s stable, please be careful—beyond that winsome smile is a deceptively powerful and merciless pimp hand.

(Tattoo by Timmo at Wicked Ink in Penrith, Australia.)

So as you’re all probably aware, since it was so important that it was broadcast into space for all to see, the esteemed President Bad-Ass murdered a fly yesterday, as it was buzzing around and bothering him during an important television interview. Luckily, Press Secretary Robert Gibbs was on hand to stomp the little bastard into oblivion afterward, just to make sure any weaponry or eggs or whatever were summarily destroyed, as you can see above. This is by far the greatest perk of being the Commander-in-Chief.

(Ha ha, we’re kidding! This is just a harmless tattoo, done on some non-governmental chap’s foot by Arthur Rose in Savanna, Illinois.)

I hate to shatter the perception that many of you surely carry of me as some barbaric figure—upsettingly manly, all rippling biceps and hearty beard and astronomical sperm count—but I have a confession. I hate bugs. Jesus Christ, do I hate bugs. More than almost anything. More than Sean Hannity hates spicy mustard. When BME was located in Mexico and I was brought on board, nobody has ever behaved less heroically than I did when faced with the prospect of massive, soldier-like cockroaches as a mainstay of the locale.

With all that said, I really like the execution of this adaptation of a C. C. Askew painting, as worn by Hayley. The purple and yellow are beautifully done, and I have to admit that even the rendering of that horrid death-critter fits nicely, as well. I will now douse myself in RAID.

(Tattoo by Timbo at Reillies Tattoo in Perth, WA.)