Since it was Rocky‘s birthday (see his photo of Kim), he asked me to consider posting these two photos he took of Jana Banana..

BMEshop is currently moving, but once we’re back you can pick one up there!

One of my favorite books on body ritual, if not my favorite, is Havve Fjell‘s brilliant retrospective Ten Years of Pain (click the link for a review). After being unobtainable for too long, Ryan at BMEshop tells me he’s got another shipment of the book in from Norway. It’s not cheap unfortunately, but it’s worth every cent, and the good news is that if you type in the coupon code “Modblog-Loves-Norway” at checkout, it’ll knock $10 off the price. Click the picture to jump to the shop page now.

Continuing this discussion of mainstreaming, I’m in 7/11 this morning and they have a new energy drink called “Inked”. It’s got a faux-tribal border, a “rock” font, and a neo-Japanese wave in the middle, and the flavor is called “Razzle Dazzle” — could there be a more embarrassing name? It’s as if they’re making fun of you for buying it. I’m reminded of the scene in Family Guy where Lois is running for mayor, and realizes that just by saying “9-11″ and “Jesus” and “terrorists” Giuliani-style, all of a suddenly the crowd starts cheering and buys whatever she’s saying… What, are tattoo fans so gullible that they’ll buy an energy drink just because it says “cool razzle dazzle tatties” on it?*

* Yes, I bought it. It tastes like a sort of watered down “Tahiti Treat”.

Maybe it’s the opium talking, but seriously, does anyone else see a face, maybe two, in that Amboyna Burl plug that Paul Debruyn (Paul’s Plugs) made? In any case, if you haven’t already checked it out, visit the custom body jewelry gallery on BME – it’s an excellent place to find small vendors that can make you one-of-a-kind jewelry if you can’t find what you’re looking for at BMEshop or your local studio…

These gorgeous plugs — on the “simpler” end of the designs she’s done — were made by Hermeone of Perishables in Philadelphia, PA.

What with the wonderful new hoody that’s just hit the presses, I don’t know why Ryan is looking so glum!

This is the last time we will speak in 2007, and I’d like to thank everyone for their help on BME this year. In perfect timing, the new BME stickers arrived this morning (they match the year-end shirts), so those of you placing orders with BMEshop may find these as gifts. Those of you getting the free top contributors shirts and are on the list should already have an email from me about it, but if you don’t, please write me. Oh, and I’d be happy to send stickers out to people hosting BME-related events as well (as soon as I am permitted to moderate events you’ll see lots more there I hope).

Thank you again to everyone who supported BME in 2007 (especially Sacred — seriously, wow!), and click the picture to continue on to the year end awards. ModBlog updates will resume in a few days.

As I mentioned, I was just visiting Santa (mostly hoping he could help me out with my peanut collection — it’s been a little boring around there), and he asked me to pass on some news about BMEshop that was written up in one of the fictional gift-givers trade journals. If you place an order over the holidays, and enter the coupon code “BME-HoHoHo” (at the checkout page, then hit “recalculate”), it will give you 5% off of your order. I believe this code is good from now until the 26th.

Remember, every time a bell rings an angel gets his wings you order from BMEshop, a eunuch loses his nuts.

Samoan Pineapple and his BME Aotearoa shirt — his great moko is by Justin Vickers at Golden Apple Studios & Shaman Body Piercing and Modifications in Austin, Texas. 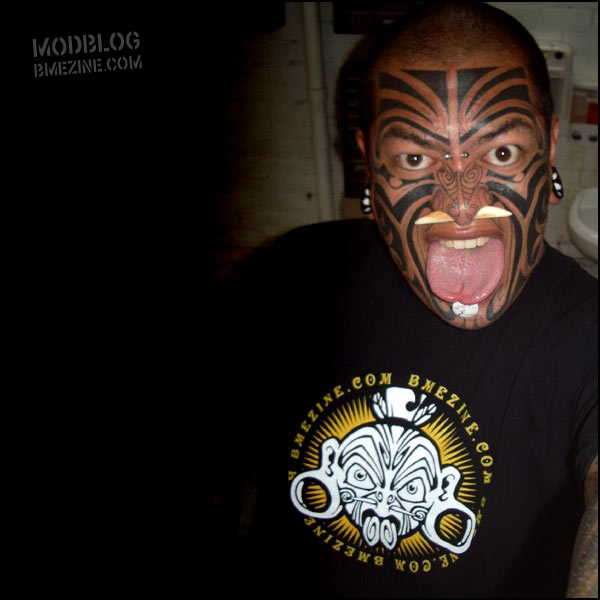 But hey, commercialism pays the bills… Better to have BMEshop ads that the insanely stupid (seriously, don’t buy the junk) “tattoo removal” creams and so on that Google keeps insisting on dumping in the tattoo galleries (we actually had a little staff meeting today debating whether we should cancel GoogleAds to avoid these scams, although I’d like to think that BME readers are well enough informed not to be conned by them).

Thanks to Trillance for sending in these shots of Kim and her “Guess Where“ BME shirt (and BME belt buckle), which as a point of trivia has sold more copies than any other single design that we’ve ever done, and has also been consistently in print longer than any other design other than the classic. 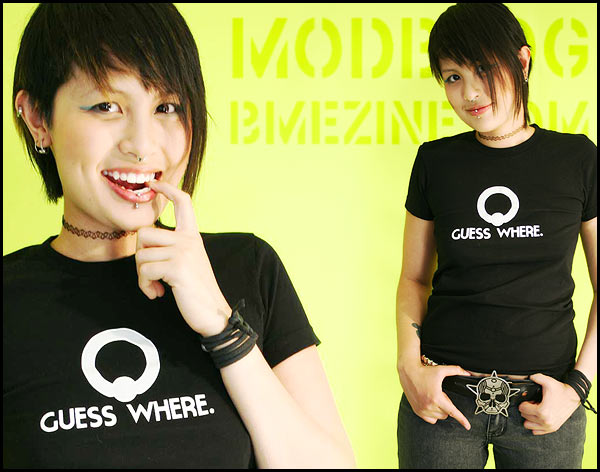 Anyway, that’s all for this evening, but like I said, I’ve got plenty more to post over the next couple weeks and will get it all queued up so things keep running in zombie mode while I’m under the knife. There’s also been a zillion images posted to BME, and I’ll have an experience update posted there later tonight as well!