I’ve said this a few times, and I hope no one takes offense, but after being constantly exposed to the current deluge of stunning — and it really is amazing work — blackwork, oft-sacred geometry, neotribal, it all starts to look the same, without any particular message or explicit unique personality. Simultaneously empty and profound — I think that’s part of the beauty of math, especially when encoded in flesh. Meditative emptiness in a tattoo. But it’s hard for me to separate myself from the ego, and I always enjoy expression that comes with an easily identified unique identity. A good example of that is this backpiece by Marc (little-swastika.com), which combines his bold art-tribal with a traditional Japanese Hanya mask, done in a sketchy trash style… A great fusion of different styles in a tattoo that is unlikely to get mixed up with anyone else’s. 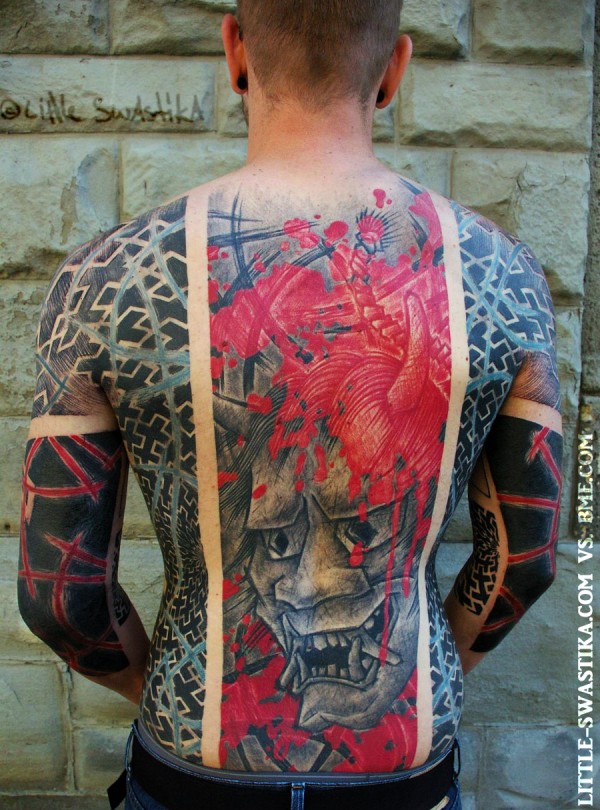 Marc (Little Swastika, little-swastika.com) recently posted this old tattoo he did in Blackie’s Heavy Blackwork group, and emphasized that it was one of his older pieces, during a period where he used much heavier swaths of solid black than he does nowadays. Even though his style has evolved a great deal since then, I wanted to publicly acknowledge it because it’s a beautiful piece of graphic design. The interplay between the heavy “maze” on the left have versus the dance of spirals on the right with a background that’s been tattooed to mimic the splotchy image of block printing, and the two halves separated with a strong scribbled red boundary line, is incredible. For a big bold piece that it is in some ways “simple”, it’s also got some great little nuances — for example, look at the very bottom right how the fine stamp pattern goes over the heavy black bar as negative space.

And in relation to some of the volatile discussion lately about the way tattoos heal, I also love that Marc almost exclusively posts healed tattoos (not that he has much choice on account of the sheer scale). These tattoos will look good forever in my opinion, not just because Marc is technically proficient, but by the very nature of their design being resilient to the natural effects of aging.

This tattoo is actually a follow-up from a post back in September of last year.  Here’s how it looked back then:

For a large number of people a personal oath isn’t something that is thought about on a regular basis.  For many religion and prayer serve this purpose, while others may not have anything put into words, they still obey some form of personal code of conduct.  Then there are people like Mario Mutant who have crafted an oath for themselves.  Mario Mutant’s personal oath was transformed into this amazing piece by none other than Little Swastika.

Taking a quick look at Bridge’s IAM page you can see just how much he has transformed himself over the years.  His latest addition is some heavy blackwork done on his skull and neck by Marc from Swastika Freakshop in Germany.

Here’s some great blackwork/dotwork from Marc of Swastika-Freakshop.  And before anyone even thinks to say it, no this isn’t a nazi symbol.

Long-time ModBlog readers will recognize this style almost instantly.  It’s the work of Freak-Mike, one of the many talented artists that passed through the doors of Swastika Freakshop.  While Swastika Freakshop isn’t operating any more, Freak-Mike is still working with Marc in Radolfzell, Germany at Little-Swastika’s gallery.

John Durante, like Ron Garza, (who I mentioned not too long ago) is another great example of a body modification renaissance man.  He owns and runs the extremely popular Evolve Body Jewelry Company, offers piercing and scarification out of Laughing Buddha as well as on the road, and he travels extensively to integrate himself into all aspects of this community of ours.

Amongst his travels he had the chance to get this amazing tattoo by a favorite amongst Modblog readers, Marc from the now defunct, Swastika Freakshop. 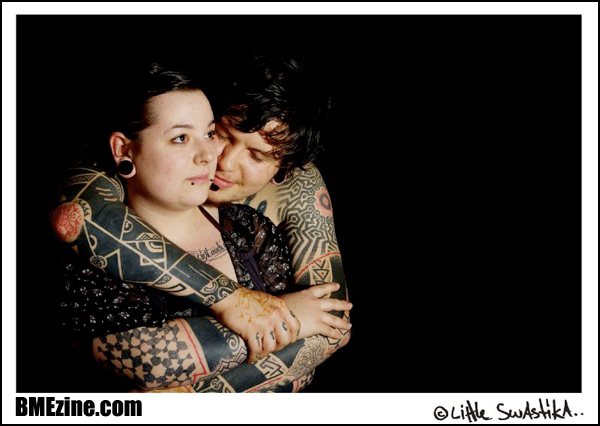 Hey, aw, this is sweet, right? Neither of these folks, Nadine (more) or Alex (more), are strangers to this corner of the Internet’s Wild West, but Nadine sent in these shots of the happy pair sporting a damn ocean’s worth of ink by our old friend Marc (with photos by Marc as well), and you know what? They were too damn cute to pass up. Everyone understands, right? Right. After the jump, some sound advice, in the form of a tattoo, etc.

END_OF_DOCUMENT_TOKEN_TO_BE_REPLACED

It’s been a while since we’ve featured a piece from Swastika Freakshop here on the ol’ ModBlog (no, really, it has!), so here we have yet another epic backpiece by Marc, this one coming in under the title “Boom Shiva.” As always, holy hell is there a lot to like about Marc’s work, and this is no exception.