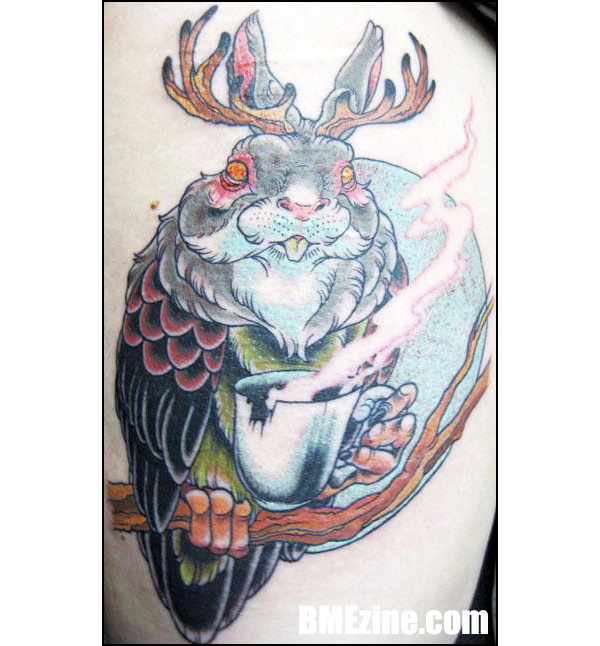 You folks are swell sometimes, you know that? After Twyla Sue showed up earlier in the week with his veritable cabinet of curiosities, Parker checks in with another jackalope tattoo? Two jackalope tattoos in one week, for reals? Is it our birthday? (It is not our birthday.) Except, of course, because Parker is not so much a human with flaws as she is a perfect being from somewhere among the cosmos, this is not just a jackalope, but a jackalope crossed with a goddamned owl, which, hey. In fact, this jaunty fellow is Fairfax, the jackalope owl, just hanging out and having a cup of peppermint tea. He likes long walks on the beach and arts and crafts involving nature.

And just like that, it’s Friday, ModBloggers, and there’s a knife on the floor.

If there is one thing to which we have held fast and true during our tenure here, it has been our unabashed love of bizarre animal tattoos. We can’t explain it. There is no rationale we can provide. These absurd creations just tickle us in a way we can not entirely comprehend, but we are forever grateful to the people who tattoo them, who get them tattooed and who send them in—TwylaSue among them. It was he who submitted this glorious narwhal chestpiece many moons ago, and he has just checked in again (from deep within the confines of an actual mustard bottle, apparently) with some shots of his legs, this one featuring what appears to be some sort of, hmm, jackalope, maybe? It is, at any rate, something that most definitely should not be. After the jump, a five-eyed wolf (in progress) and some other goodies.

END_OF_DOCUMENT_TOKEN_TO_BE_REPLACED

Oh, hello! Let’s begin our day with some work by the fabulously goat-throated Adam Burdine, currently spending some quality time at Simon’s Tattoo and Piercing in Baden, Germany. Here we have two lupine-humans, locked in the love that dare not howl its name. However, with the pre-existing skull/barbed wire band at the top, does it not sort of look like twin Wolf Jesuses just going at it? We, of course, approve of and wholeheartedly endorse such sacrilicious iconography, be it intended or not.