Well, obviously it’s a demon skull, but he’d know which type of demon it belonged to.

The scar itself is a collaboration between Jeffrey Velders & Kyle Pitcher when Kyle was doing a guest spot at Paradigm Body Art & Old Town Tattoo in Arnhelm, Netherlands.

Email your submissions today! Simply send your photos to [email protected] and they’ll be automatically added to the image galleries. 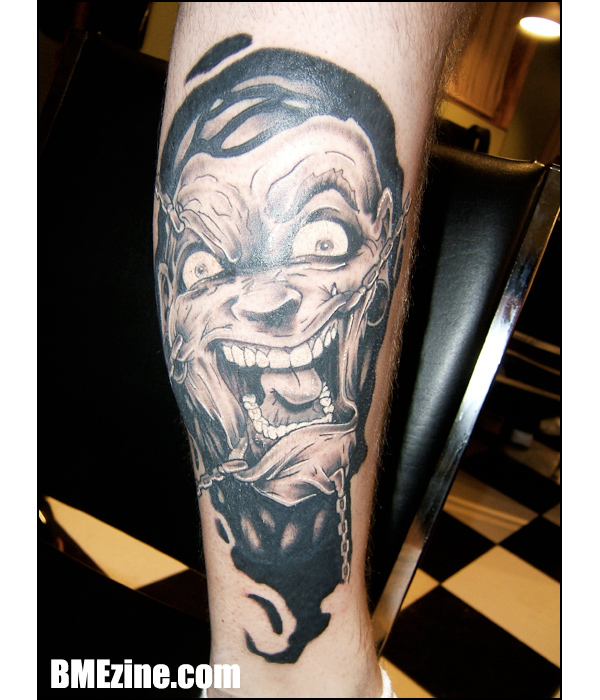 And hey, while we’re on the subject of Mr. Wiscombe below, let’s keep things black-and-gray-ish (and western Canada-ish) with this perturbed and tortured demon-type by Shawn Thompson at Strange City in Edmonton, Alberta. Now, as an impartial resource, we can neither confirm nor deny the frequency with which Mr. Thompson conjures such wretched hell-beasts, nor do we feel comfortable offering an opinion on his dark and terrible talents. We will merely suggest that you do not cross him. That is all.

Oh sweet holy shit. This is just…my God, man. The work (by Dustin Gray at AAA Tattoo in Rogers, Arkansas) is excellent—top o’ the scalp isn’t always an easy spot to get right—but this is about as terrifying as one could hope for. This gentleman has tried to grow his hair back, but this tattoo has scared his damn hair follicles shut. True story.

And just like that, dear readers, our week has reached its logical conclusion. What the hell just happened?

- Brian Decker is slaying lately, and this hand/wrist/forearm cutting is just further evidence of the fact.

- The Owl God made a triumphant appearance!

- This gentleman was fortunate enough to survive his own autopsy, which is pretty rare.

- We instituted our moratorium on Michael Jackson tattoos, but went out with a bang.

- Massachusetts is going in the right direction with new regulations. Dallas is not.

And we’re off! Keep checking back all weekend for Alex’s dispatches from the 2009 Oslo SusCon and whatever other goodies we manage to dig up, and then come Monday it’s back to business as usual. Until then, have fun, stay safe and, as always, thank you for your continued support of BME.

And finally, folks, as you prepare for bed or whatever it is you do once the sun goes down (rob blood banks?), here is your newest nightmare monster, some terrible devil-skull with human hands and the keys to, let’s see, Hades? Does Hades have keys? It does now, we guess, and that’s where this creature is taking you. Just follow the diamond. We’ll see you on the morrow.

[Telegraph.co.uk] As time progresses, it’s no secret that body modification is becoming more and more accepted by the public at large. This is not without its pitfalls, of course; as more people engage in these acts, some feel the culture becomes more diluted and perhaps not quite as meaningful or special. Whether or not one agrees with this sentiment, it’s by no means an invalid concern, but a larger percentage of people taking an active interest in body modification seems to be one of the trade-offs of having it become more acceptable across society. And, even if one isn’t thrilled by the prospect of a widespread commodification of body modification, it stands to reason that, at the very least, it should be seen as a largely positive thing when it’s normalized to the point that the “freak-show” element is, for the most part, a non-issue.

And then some moron like this comes along and, like every Tyler Perry movie, sets the group back a few hundred years.

Hey, meet 39-year-old Gavin Paslow, a.k.a Diablo Delenfer, which means, “devil from the inferno.” Fun! He was a security guard, but then he defrauded the government for thousands of pounds to receive health benefits that he then in turn used to pay for body modification procedures (implants, tongue splitting, etc.) to make him look like the devil, and now he is a schmuck convict living on house arrest and doing nothing to combat the image of our fair community as Satan-worshipping criminals. Yay.

He took the money while working variously for a security company, two separate recruitment firms and as a self employed guard

The wannabe demon, of Seasalter, near Whitstable, Kent, was this week banned from leaving his house at night – after being slapped with a curfew from 5pm to 5am every day. He was also fitted with an electronic tag.

He pleaded guilty to seven offences of failing to promptly notify the Department for Work and Pensions of a change in circumstance that he knew would affect his benefit claims.

Look, we here at BME have no problem whatsoever with Satan, nor with people who choose to look like him in some manner, as long as such goals are achieved using one’s own funds. That is to say, feel free to get yer devil on, but try not to steal in order to pay for the necessary procedures, got it, you goof?

Speaking outside court said: “Obviously, there aren’t many people who look like me and some might be a bit taken aback,” he said.

“But other people realise I’m an almost normal human being in other ways and the kids love it,” he said.

Ha ha, because Satan is for the children, you see. Step aside, Wu-Tang!

[BILD] And it is not just devil doppelgangers corrupting our delightful youth, either! Famous soccer person David Beckham, also known for getting all tattooed up like the dark lord himself, is setting a terrible example for his children, who now also want to grow up to be Wiccans or whatever.

David Beckham’s sons are desperate to get tattoos like him. The British soccer star – who has boys Brooklyn (10), Romeo (6) and four-year-old Cruz with wife Victoria Beckham – has revealed his children are so impressed with his body art they are keen to copy it. He said: “One of them said to me recently, ‘How old do I have to be before I get my first tattoo?’ I was like, ‘A lot older than you are now!’”

Apparently Becks hasn’t heard of reverse psychology! Now his kids are doomed, doomed, and it is all his fault. May as well just sign ‘em over to the LaVey estate and be done with it. Tell them to keep an eye on their wallets, though; that new security guard over there has some sticky fingers.

BME Shop is holding a 20-percent-off sale on most items until midnight tonight! Click here for details.

Technical tomfoolery, sadly, kept us offline for a few hours this evening, but we’re back up and running and could think of no better way to send you fine people off into dreamland than with this horrific demon child, having just feasted on the tender flesh of an innocent. But hey, look how happy she is! That’s what counts, right? (So help us God she will eat your damn face if you disagree.)

BME Shop is holding a 20-percent-off sale on most items this week until midnight on Thursday, July 16! Click here for details.

And here, straight from wintry Siberian Novosibirsk, Russia, comes a handsome young gent (with his lobes stretched to an impressive 60 mm.) and his terrifying nightmare doll. Sure, he says it’s part of a “performance” of some kind, and maybe he deserves the benefit of the doubt, but the second that thing shows up in my dreams and tries to devour my soul (only a matter of time, really), I swear to God I am driving to Russia and throwing that creature in the fire pit.

Oh Jesus, sorry to ruin your sunny Friday afternoon with this, but man alive would you look at this terrifying monster? People are just trying to leave the city to go drink at their cottages, the way God intended for them to spend Independence Day, but this creature in the flame-retardant suit is just cold tossin’ their cars this way and that. Could this be a metaphor for something? Something…sinister? Probably. Either that or it’s a scene from that damned new “Transformers” movie the kids are all crying about.

(Tattoo by Istvan at Primitive Origins Tattoo in Hammersmith, England.)

Well well well, it’s been a solid month since we checked in with known idolator Adam and his gleefully evil throat, which, back then, was still mired in outline hell. Now, as we can see, it’s in full color and ready to, I don’t know, what do earthly manifestations of the devil do? Capsize a boat? Start a forest fire? Eat at Applebee’s? Yes, Adam’s satanic throat goat is going to be at Applebee’s if anyone needs it.

And because this piece just fits his face so well, it’d be a pity to not include a side shot, right? Right. You know where.

END_OF_DOCUMENT_TOKEN_TO_BE_REPLACED

We took a look at this hateful hell demon a few months ago, when it had been freshly cut by Brandon Vermillion from Fillmore Tattoo (who you may remember as the young man who got his damn eyebrow cut off and ignited one hell of an amusing flamewar). Well, it’s a few months down the path towards healing now and, I have to say, still looks pretty damn angry and not just a little evil. Maybe it’s because he’s got all those teeth and no toothbrush? It’s hard to get a read on murderous hell-beasts these days.